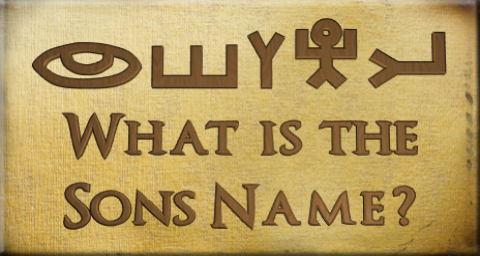 Son of Yah’s Name contains ‘YAHU’ like His Father, and More..!

Please know that we will never say that “this is RIGHT and if you don’t say it this way it’s as bad as reverting back to using ‘Jesus.’”  As has been well said, no one recorded the Majestic Voice on Mt. Sinai, nor stuck microphones in the face of the Rabbi.  Many of our dear believing friends still pray using Jesus, Yeshua, even Yahusha.  As they allow us to pray Yahushua.  These are personal convictions, and more archaeological written evidence may be discovered that is going to cause us to change again!  The point is, we have a desire and a respect for His Jewish identity.  We wish to pronounce His name to be as significant as He is.

MKI Studios owes tremendous documentation from the excellent work on the Eliyah.com website.  This was THE WEBSITE that made us rest upon the name as Yahushua.  Let’s now get into Hebrew letters and grammar.

HEBREW WORDS WITH VAV MOST OFTEN ONLY USE IT ONCE…BUT THEY ALSO WROTE THE VAV TWICE!  AND IF IT IS WRITTEN TWICE, THEN IT SUPPORTS THE PRONOUNCINATION OF YAHU-SHOO-A.

This little letter is the cause of MUCH confusion!  Just that little stroke!  But most often, it is only used one time to write out the word “Joshua.”  Joshua is the actual name for our Rabbi and Savior.  It looks like this most often in Hebrew:

HOWEVER, this is from ARAMAIC alterations!  And this is where we are indebted to the eliyah website.  Back to the point of what was said, that the vav doesn’t have to be written twice to get he “OO” in “YahushOOa, is now supplied below in this direct cut/paste form their website.  I highlighted areas in bold yellow.  This is a section explaining why “Yahusha” is not ‘more accurate’ because it’s obvious there are no two vav’s, therefore is the “sha” sound only.

This form gaining in popularity fairly recently. However, it is easily proven to be incorrect. Let's examine the Strong's Lexicon entry that represents the Messiah's name again:

Deuteronomy 3:21 "And I commanded Joshua יהושוע at that time, saying, 'Your eyes have seen all that Yahweh your Elohim has done to these two kings; so will Yahweh do to all the kingdoms through which you pass.

Judges 2:7 So the people served Yahweh all the days of Joshua, and all the days of the elders who outlived Joshua יהושוע, who had seen all the great works of Yahweh which He had done for Israel.

In the Dead Sea Scrolls manuscripts, the longer spelling is also found in the following verses:

Joshua 8:3 - So יהושוע arose and the whole army [rose up and marched on Ai. Joshua chose thirty thousand men], valiant warriors and he sen[t] them out [at night]. (4QJoshA, bracketed text missing from manuscript)

Joshua 6:7 - Then  יהושוע [said] to the people, ["Go forward, march around the city, and let the armed guard march ahead of the ark of Yahweh"] (4QJoshA, bracketed text missing from manuscript) 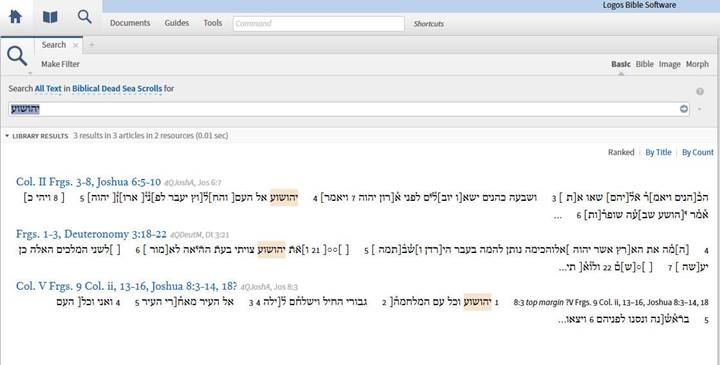 Here is how each letter is pronounced:

ש Shin - Produces the "sh" sound. The following "oo" sound is indicated by a vowel pointing but Deut. 3:21 and Judges 2:7 actually gives us another "waw" after this letter, proving the "shu" pronunciation as valid. This is why Strong's 3091 gives 2 possible spellings (see above lexicon graphic). This also eliminates "Yasha/Yahusha" and "Yahoshea/Yahushea" as being possibilities.

ו Waw - Again, produces an "oo" (u) sound as in #7307 Ruach. This is the ignored letter in the pronunciation "Yahusha." As it is common that Hebrew words do not supply all the vowel sounds, this letter is not always used.

ע Ayin - Silent without a vowel point but indicates an "ah" sound at the end of "Yahushua".

Those who use "Yahusha" will sometimes claim that "shua" can actually mean "riches." This word "Shua" and the "riches" definition is found as Hebrew word #7769 in the Strong's lexicon. But when you examine how the word "shua" is actually used in the Hebrew, it becomes evident that the Strong's Lexicon may not be correct about that.

The word "shua" is only found in two verses, making it more difficult to determine the meaning.

Job 30:24 - "Surely He would not stretch out His hand against a heap of ruins, If they cry out ("shua") when He destroys it.

Obviously "Riches" would not be an appropriate meaning here. It sounds more like someone "crying out" to save them from destruction.

The Young's Literal Translation reads it this way:

Job 30:24 - Surely not against the heap Doth He send forth the hand, Though in its ruin they have safety ("shua", salvation)

So the word could legitimately come from "yasha" and carry the meaning of "salvation."

In the second instance, it is alluding to one trying to make their riches their salvation, saying Yahweh ultimately owns all the gold and has all the forces of power. Again, from the Young's Literal Translation:

So it certainly is possible the "shua" is rooted in the verb "yasha." The Strong's word #3444 is pronounced "Yeshuah" but it is derived from #3467 "Yasha." This shows that the "shua" sound can indeed be derived from the root word for salvation, "Yasha." It's just the Passive Participle form of "Yasha." Thus, "shua" can also be derived from "yasha"

Therefore, "shua" might indeed legitimately be rooted in the Hebrew "yasha" meaning "save."

For this reason, it seems plausible that "shua" in these instances may actually be rooted in the Hebrew word "Yasha." In fact, the Theological wordbook of the Old Testament makes a comment that "shua" could legitimately be derived from either "yasha" (save) or "shawa" (cry).

So Lexicon writers don't have assurance as to its meaning, and the Brown Driver Briggs lexicon even says its "meaning is dubious."

If you still aren't convinced, consider the following points:

Thus, in spite of those who claim it cannot, the Messiah's name can have the "shua" sound even though it is derived from "yasha" (meaning "salvation") and there are clear examples in the scripture where "Yahusha" would be an impossible rendition of the Messiah's name.

(THE FOLLOWING IS ANOTHER DIRECT CUT/PASTE FROM THE ELIYAH.COM WEBSITE EXPLAINING THE MISTRANSLATION OF YESHUA.)

Much used by the Messianic movement, "Yeshua" is actually an Aramaic form of the Hebrew name "Yahushua". In the Hebrew script, Yeshua ישוע is not spelled the same as Yahushua יהושע. The "Yeshua" name, spelled ישוע (Yod Shin Waw Ayin), is found in the books of Nehemiah and Ezra where it lists the names of those who returned from the Babylonian exile. One of them is called "Jeshua, the son of Jozadak":

Ezra 3:2 Then stood up Jeshua the son of Jozadak, and his brethren the priests, and Zerubbabel the son of Shealtiel, and his brethren, and builded the altar of the Elohim of Israel, to offer burnt offerings thereon, as it is written in the law of Moses the man of Elohim.

"Jeshua the Son of Jozadak" is the same High Priest mentioned in Zechariah 6:

Zechariah 6:11 Then take silver and gold, and make crowns, and set them upon the head of Joshua the son of Josedech, the high priest;

Nehemiah 8:17 And all the congregation of them that were come again out of the captivity made booths, and sat under the booths: for since the days of Jeshua the son of Nun unto that day had not the children of Israel done so. And there was very great gladness.

The change in spelling to "Jeshua/Yeshua" (ישוע "Yod Shin Waw Ayin" ) is due to the Aramaic influence during the exile. In fact, parts of the book of Ezra are written in Aramaic. For confirmation, look at your Strong's Lexicon:

Notice that #3442 and #3443 are the same exact word with the same Hebrew spelling, but this lexicon lists them separately. Why is this?

Therefore, "Yeshua" is actually an Aramaic rendering of "Yahushua". Only #3443 lists the spelling as Chaldean, but #3442 is spelled the same. 1st and 2nd Chronicles, post-exilic books that were written by Ezra the scribe, (compare the ending of 2Chron to the beginning of Ezra) also have this Aramaic spelling. This late pronunciation is found nowhere else in the the scriptures.

So the name "Yeshua" and the Hebrew word "Y'shuah" are not the same. "Yeshua" is the Aramaic form of "Yahushua" and "Y'shuah" is the Hebrew word for "Salvation". Therefore, in spite of what some may say, I find no evidence to suggest that ישוע ("Yeshua") means "Salvation" in Hebrew. I'm not refuting Strong's definition. Perhaps it means this in Aramaic, or perhaps it means "he is salvation" in Aramaic, but "Yeshua" is actually not an authentic Hebrew word meaning "salvation". For it to mean "Salvation" it would have to have the Hebrew letter "heh" added to the end of it, changing the spelling to ישועה (Yod Shin Waw Ayin Heh) and it would need to have the

"Sheva" vowel point under the Yod. These things further indicate that "Yeshua" isn't from Hebrew, but is an Aramaic form of "Yahushua".

But does the presence of the Aramaic form "Yeshua" justify its use over the Hebrew "Yahushua" when it comes to our Savior's name? In light of the scriptural importance of our Savior's name, I would be cautious of assuming that what's acceptable for a common man (Yahushua son of Yahutsadak) is just as acceptable for the King of Kings, to whom all power and authority in heaven and earth is given. Acts 4:12 states that there is no other name under heaven given among men whereby we must be saved. How then can I find comfort and a clear conscience if I choose to willfully change and alter it in any way?

Since the Heavenly Father's name (Yahweh) is a Hebrew name, I would not expect to see His Son's name coming from some other language, whether it be Greek, Latin, Aramaic or English. The synagogues of the first century read from the Hebrew Torah scrolls, so the people certainly knew Hebrew in those days...even if Aramaic was also spoken.

So while the other forms seem to be more popular today, in my mind "Yeshua" (Aramaic) is no different than other flawed transliterations such as "Iesous" (Greek), "Iesus" (Latin), or "Joshua/Jesus" (English). None of these languages accurately convey the original Hebrew pronunciation, so why not return to the original, correct, Hebraic form? If none of those languages render "Yahushua" correctly, then it would be most prudent to just skip all of them and go back to the Hebrew!

If you have the Dead Sea Scrolls using a double vav to clearly show the “oo” sound, we put our trust there.

For the entire article of all the variations of the Son of Yah’s name, click the Eliyah link below:

Click on the heart above to recieve our newsletter