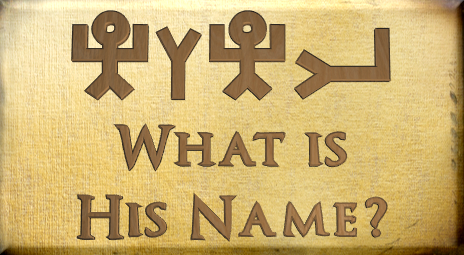 HOW HIS NAME WAS ALMOST LOST WHEN TRANSLATED INTO ENGLISH:

A TRANSLATION SOAKED IN BLOOD

Translating Hebrew into English for our ability to comprehend Scriptures has been a tumultuous, bloody road.  Any believer would do well to gain appreciation for those “dissenters” who dared to translate the Scriptures into English.  This gave anyone the opportunity to read or hear Scripture for themselves.  The individual now could establish and equip their faith outside the power and control of the ‘church’ of Rome. The edict from Rome only allowed Scripture to be heard in Latin, within the walls of local ‘churches’ by clergy.  Imagine today if you only spoke English and could not own a Bible? Imagine your only resource to Scripture was by going into a ‘church’ that gave any biblical discourse in Latin?  Such was the lot for most English-speaking people for centuries until the Reformation.  Only the few who received University studies enriched by the Renaissance were fortunate to help end this control.   If there is any person you should know each time you open your Bible, it is William Tyndale.  He died for getting the Scriptures translated from their original languages into English.  He was strangled by an iron chain, then his corpse burned and blown up from those in power at Rome, in consent of the English King.  Both labeled him a heretic for placing Scripture in the hands of mere commoners in their mother tongue.  Tyndale, and other martyrs in this translation movement are the reason you hold English Scripture in your hands.

Less than 100 years from Tyndale’s version came the King James bible.  This version is linked with the Strong’s Concordance of Hebrew and Greek whereby you’ll find the facts presented.

Psalm 68:4 (KJV)  Sing unto God, sing praises to his name: extol him that rideth upon the heavens by his name JAH, and rejoice before him.  (italics, underline, and yellow highlight added)

What is this?  What is ‘JAH?’  Somehow, in the translation from Hebrew to English, the actual Hebrew word referencing the sacred Name slipped in.  Hebrew does not have a “J,” so this is a ½ translation.  It should translate as “YAH.”  However, this is just enough to catch the eye and attention of an English reader, who, if a serious student of the Word- would resort to a Strong’s Concordance.

Contracted for H3068, and meaning the same; Jah, the sacred name: - Jah, the Lord, most vehement.

His name ‘JAH’- This is part of what is called the “Tetragrammaton.”  It is actually pronounced “Yah.”  The Strong’s reference number H3068 gives the full 4 letters of the Sacred Name of God.

From H1961; (the) self Existent or eternal;….Jewish national name of God.

Everytime a reader sees the Tetragrammaton of “LORD” in their English bible, the Hebrew equivalent (in English letters) is YHWH.  The full name of God is pronounced YaHuWaH.  This Name will be fully explained, as to how we reached this conclusion.  First we will start with the letters “Y” and “H,” and how this becomes pronounced as “Yahu.”

Many Hebrew names in the Old Testament contain Yahu, which is the first 2 letters of the Tetragrammaton. (Y-H).  I am only listing a few of those many names that are commonly recognized by believers.

YAHU at the end of their name:

Having your God included in your name showed your devotion to Him.  You are a part of Him, serving Him, or should be in accordance to your parents and community in Torah.  Your identity is Jewish.

YAHU can also appear at the beginning of a name.

THE MESSY ‘TRUTH’ OF HEBREW VOWELS: DEALING WITH THEIR MYSTERY

All the English words translated from Hebrew names containing the word “Yahu” have vowels “e,” “o,” or “u” that translate to the “a” and “u” of yAhU.

It quickly becomes clear that the English translation does not have set rules as to how vowels are used.  Whatever is the preference of the spelling gets approval, because the meaning does not change.  Kelly is Kelli is Kellee.      Yet in Hebrew, vowels are not interchangeable because of a common 3 consonant root word system.  You change the vowels of that 3 consonant system and you have entirely different words.  Here’s an example:

English consonants are S-D-R. These three consonants can have vowels added that give entirely different words.

Vowels are just as important to the meaning of what becomes a Hebrew word as the consonants themselves.  A vowel’s pronunciation on the meaning of an English word does not change it.  (You say potato, I say patato.)  Various vowels and their pronunciations still mean the word refers to a vegetable.  What makes this a headache in learning Hebrew, particularly ancient Hebrew, is that vowels were not added into documents uniformly, until the 6th and 7th century A.D. (CE).  It would be like reading this sentence in English:  “TH FT BT.”  What could this be with vowels added?

The one who deciphers the coded language will have to somehow get the content of the sentence before and after it, perhaps even more, to determine how to insert vowels.  How does someone know what is a colloquialism, or if this type of language puts descriptors in front of a noun, or after?  (Ex.  A green house, or a house green?)  All these needs determined over even a sentence as “simple” as 3 words!  In the case of the Hebrew language, Masoretic scribes added the vowels, and within a few hundred years there were disagreements to the vowels, and changes were made again.  So how do we arrive at accurate pronunciations?

The land of Assyria (where Abraham came from) contains written evidence to (what we perceive) is the most accurate pronunciation for a shortened name for “God” as “Yahu.”  Archaeological artifacts of Assyrian obelisks and cuneiform supports the Name of the Tetragrammaton to be “Yahuwah.”  Tyndale translated it as Yahuwah.  Subsequent translations changed this correct pronunciation.  A succinct, excellent video explaining the name “Yahu” is provided below.  Well worth its 5 minutes.  (We are not affiliated with this group of believers but support their conclusions.)

Some may still conclude that searching to determine the Name of God is a waste of time.  Yet Scripture says over and over we are to “call upon His Name.”  So, what is His Name?  Scripture makes a redundant point about it.  (Note the tetragrammaton “LORD.”  It should at least be translated as “YHWH.”)

1 Chronicles 16:8 -Oh give thanks to the LORD, call upon His name; Make known His deeds among the peoples.

Psalm 105:1 -Oh give thanks to the LORD, call upon His name; Make known His deeds among the peoples.

By the 3rd generation from Adam, people began to call upon the Name of the ‘LORD.’  From historical, archaeological, and scholarly examination of languages, that “Name” for God is Yahuwah.  The shortened derivative is “Yahu.”

This leads to what we think is of even greater importance and significance.

“If we have determined that the root of the Sacred Name for the Scriptures is “Yahu,” did not the Savior say, ‘I and the Father are One?:’” Wouldn’t then their names be One?”  In other words, wouldn’t “Yahu” also be in the name we used to know for ‘Jesus?’

We were driven by the verse in Proverbs 30:4 (underlined, emboldened, italics from MKI Studios emphasis)

Who has ascended into heaven, or descended? Who has gathered the wind in His fists? Who has bound the waters in a garment? Who has established all the ends of the earth? What is His name, and what is His Son's name, If you know?

Let us now move on to Part II.

What is His Son’s Name.

Click on the heart above to recieve our newsletter